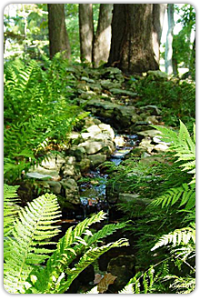 Containing almost 150 species of ferns displayed along meandering paths, the Fern Glade is an oasis of shade at the northern end of the Nature Trail. The ferns are all hardy in this region; that is, they will return each spring even though most go dormant during the winter months. Some are evergreen, retaining their green foliage throughout the cold months. Some ferns especially abundant in this region are the Christmas Fern, the Northern Maidenhair Fern, the Southern Maidenhair Fern, the Sensitive Fern, the Royal Fern, and the Cinnamon Fern

A waterfall, pond and belvedere add to the pleasure of a stroll through the Fern Glade.