In August the colony of mature and juvenile Purple Martins joined other martin flocks from across the eastern US  that gather into large flocks numbering in the thousands to roost at night in forest near water or secluded groves of trees.  The flocks grow in numbers over time and may remain in a roost location for several weeks during which time they fly out in early morning to feed in an area of up to 60 miles radius. Although individual roosts remain active for up to six weeks, individual groups may only stay at a roost an average of few weeks at which time they begin their long migration to South American for the winter. One primary destination is the Amazon basin of Brazil.

While this flocking phenomena most often goes unnoticed, over the past several years weather radars have detected  massive flocks before daybreak. The radar detection appeared to be concentrations of rain showers. However, many such events are detected during dry weather conditions and in actuality the radar images are showing the large flocks of Purple Martins emerging in mass from their roost.

Gathering of a large flock near water

Radar Image in August 2016. “Raining Purple Martins”
Note the martin concentration around Huntsville.
Very likely the Garden’s Martin Colony is in this flock. 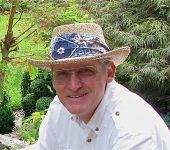